We might have a female available for active/sport/working home.

We have 3 females and 3 males puppies born on 20-21 Aug 2013 obligatorily genetically free from PRA and PLL after both parents free from elbows and hips dysplasia with billateral normal hearing: Roxy - CH Va Bene JOYRIDE PT, PTT1 (Companion and Tracking Dog 1) HDA,  ED00, Cerf ok of June 2013, Baer ok  and BOB Lassic BLUE HAWK TAN HDA1, ED0, Baer ok, Cerf ok of July 2013.
Scans of all health tests can be sent on email, some are at the bottom. 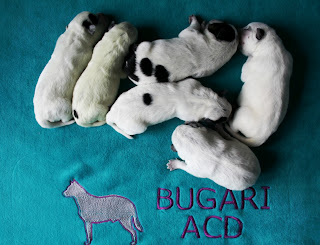 Link to more pictures with puppies 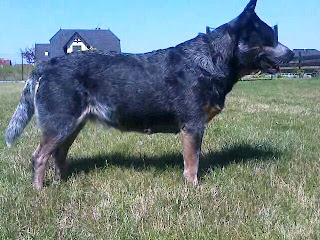 Roxy on 36th day of pregnancy

ACTIVE PEOPLE INTERESTED IN A PUPPY FROM THIS LITTER ARE WELCOMED TO CONTACT ME   e.osuch@gmail.com, telephone or FB

Roxy is genetically free from PRA and PLL, she has current eye certification of June 2013 and is free from eye diseases, she is free from elbows and hips dysplasia, HDA i ED0/0,  her hearing was BAER tested to be bilateral normal, her bite is correct and scissors. She is missing one lower left P2 tooth (and one in front that was broken and then removed by the vet for which I have a written confirmation in her passport :) )

Roxy as a first in Poland ACD gained the title Companion and Tracking Dog 1 at just 15 months old.

She is also the mother of our titled and talented Guerra  PL CH  ARMADA OF LOVE Bugari  who is certified as Search and Rescue Dog of 1st level,  RH-FL A (2nd place out of 12 dogs), RH-FL E, RH-T E, PT1, PT2.

Roxy's other daughter Bindi -  ANTI-RIOT BINDI Bugari lives in Holland with her ownerSigrid Sijtsma and below 1 year of age was tested for herding instinct and gained excellent note as only 1/3 ACDs at the time in whole Holland! I am very proud of this talented bitch. More about the scores can be read here. She also went through temperament test successfully . She is already Dutch Junior Champion and very close to finish her Dutch Champion title. In just 4 shows in Poland she gained Poland Champion title, Poland Club Winner, Poland Winner, 2xCACIB, 2xBOB, and Crufts nomination.

ALLIED INTELLIGENCE Bugari owned by Loren c. Manzell in NY takes part in movies, advertisements and commercials. Her owner is very happy with her temperament and working abilities.

Father of our B BUGARI Litter is called HAWK and his pedigree name is Lasic BLUE HAWK. He has been imported from USA and he lives in beautiful French village at hills close to Lyon supporting his owner during goat, sheep and cattle herding. By the way, the owner makes great fromage cheese! Hawk's owner claims he is born to herd - no wonder having looked at his pedigree. Hawk is from ACD kennel aiming at breeding dogs for work and herding.

Please feel invited to watch movies with Hawk
During goats herding, During sheep herding and  during farm-like jumps and movement

Hawk is a balanced dog, energetic but not hiperactive, he loves to work when it is needed, rests when there is not much to do.
He does not show aggression to people nor to other dogs.
To strangers in public places he is neutral.
He is not scared of fire works.

In July 2013 Hawk gained TAN certificate on cattle.
It is a special test for ACDs and Kelpies checking natural aptitude the dog has for herding.

So far he has been only once on dog conformation show.
He gained a title The best dog of all Australian herding breeds out of 7 ACDs and 5 Kelpies in France and he was just at 14 months old.

Hawk has in his 4 generation pedigree 6 Herding Champions about whom you can read in great Deb Casey article that is an attachement to ACD Spotlight:

Socialization of the puppies is very important to me since I want them to grow to be brave, self confident, curious, adventurous puppies, to be active workers but not nonsense ADHD dogs, easily learning, with good focus on work.
I am planning and socialising the litter to have not only beautiful, but first of all healthy and brave dogs that will satisfy their future owners.

I want the future puppies owners to respect and love, but not spoil their dogs, to be assertive leaders who know how to set rules.
They oblige to socialize, train and well behave their dogs to be good citizens, and of course to spend the time with the dogs actively!!!!

Please be aware that I reserve the right to choose the owners for my puppies according to my wish until the contract is signed.


I might also not have enough of male / female puppies for all the nice people interested in a puppy from me.

The new owners oblige also to:

BUGARI ACD
My aim is breeding healthy ACDs with temperament suitable for work, sport and being a companion. Parents of the litter have elbows and joints tested for dysplasia, at least one of the parent is genetically free from PRA and PLL, are BAER normal,have clear eye certificates. During selection of puppies parents I take into consideration if they are brave, can focus on a given task, if they are motivated for work, have any work or sport tests passed. Puppies will be hearing BAER tested. People willing to spend active time with an ACD are welcomed. I expect puppy owners to xray they dogs for hips and elbows dysplasia in proper time and inform me of the result. I want to keep in contact with the puppy owners so PLEASE take it into account :))